Lollapalooza – So Much More Than a Music Festival

Well, another Lollapalooza has come and gone now and it definitely did not disappoint, with headline performances by The Weeknd, Jack White, Travis Scott, Bruno Mars and Arctic Monkeys and one hundred and eighty six other amazing bands, how could it be anything other than stellar!

But let’s not forget that Lollapalooza is so much more than a music festival and there is so much that is offered year after year, like plenty of great places for food like, Lou Malnati’s Pizzeria, Robinson’s No. 1 Ribs, Beat Kitchen, Wow Bao – Hot Asian Buns and Broken English Taco Pub, citing some of the different types of eateries available.

And there is nothing on this world better to compliment great food other than great wine provided by California’s Cupcake Vineyard who returned again this year to bring festival-goers something truly unique and unavailable anywhere else at the moment, the Poptail, mixing their already delicious Sauvignon Blanc with a hibiscus margarita popsicle and you get a one-of-a-kind taste sensation to compliment your one-of-a-kind festival experience, what more could you ask for? Read Kayla’s full review and learn more about Cupcake Vineyard right here.

Lolla Market offered plenty of places to pick up virtually anything your festival-going heart desires like Festy Besty, a company founded in 2014 by Paige & Ryne Iseminger who have set up pop-up shops at festivals all over the world where you can buy hats, backpacks, bikini tops and even the ever-popular festival glitter. The Lollashop was in full swing again this year, almost always with a line outside of festival-goers waiting to buy some great Lolla gear.

Lolla Cares had many more new additions this year including Amnesty International USA, GoCivic, Chicago Parks Foundation and Shedd Aquarium moved from the Kidzapalooza section over to the Lolla Cares section and was offering free reusable straws if you commit to giving up plastic straws, which I gladly did.

Near Da Beers Garden and adjacent to the BMI stage, was another new addition this year, Fruit of the Loom’s Human Claw Experience where we witnessed one lucky person who won tickets to the Playboy after party and another who won VIP tickets, the grand prize, in fact! So, congratulations to them!

Next to Fruit of the Loom’s Human Claw Experience was Asics: Make Your Move, where you can turn your dance moves into art and win some great prizes too. Speaking of staying active, that brings us to Kidzapalooza (presented by Lifeway Kefir and supported by Berklee College of Music) where I brought my daughter to get her first experience of what Lollapalooza and Kidzapalooza is all about. So many great ways for kids to have fun, create music and crafts and to watch great family-friendly performances of their own like Lucy Kalantari & the Jazz Cats who opened up the Kidzapalooza stage on opening day and returned on Friday as well. Read my review of Kidzapalooza right here.

This brings us back to the music of Lollapalooza, so many great sets over four days and I said it last year, and I’ll say it again, it is an ‘overload’, but the best possible overload any music fan could ever hope for. Stand out performances we saw were from Larkin Poe (BMI), Emilia Ali (American Eagle), Grace Weber (BMI), Gashi (BMI), Dream Wife (Lake Shore) and Lewis Capaldi (Lake Shore), but, in no way does this diminish the incredible talent and performances of any of the other artists that made Lollapalooza 2018 one of the best Lolla’s yet. 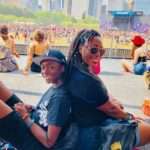 What do some of the Lollapalooza attendees have to say? Well, Elijah, (a first time Lollapalooza attendee) was there catching Emilia Ali at the start of the third day and had a platinum pass which allowed his first experience to be the best a young man can have. Elijah and his mom Ashley, both enjoyed great seating overlooking the stages, golf cart shuttles, unlimited food and even got to meet Youtube streamer, Ninja and Lollapalooza artist Daya. These are what great memories are made of! Other attendees I spoke with, Mike and Anne, also there to see Emilia Ali added that they’ve become great fans of a lot of the artists they’ve discovered through the Lollapalooza festival and still another festival-goer felt that the cost of admission for Lollapalooza was very well worth it, with a lot of Hip Hop acts that he’s seen this year and in many previous years.

Shockingly, considering the heat Chicago experienced this year, I was still very surprised to see many people unprepared for it, with no sunscreen or water to keep them hydrated throughout the day, and for me, I have to personally plug Coppertone’s Sport 30 sunscreen because I (myself) had actually gotten sunburned on a cloudy day at Great America earlier this year and was baking in the sun waiting for Dream Wife and was completely protected. Many of the staff across the festival grounds and even artists like Gashi made sure to do all they could to keep people hydrated; providing water every chance they could.

Being prepared and being safe are two very important factors to always keep in mind while attending Lollapaplooza and for your safety, Lollapalooza increased security this year to ensure everyone stayed very safe and I entered Lollapalooza through several different entrances this year and not once did I see the stepped up security measures cause any frustrations or problems with anyone.

In closing, I would say the only thing I would like to see for next year is a slight change to the Lolla app to allow the user to add a customizable field for the ‘My Schedule’ section of the app, to be able to plan out the entire daily schedule outside of just the music events. Other than that, they have perfected every element of the festival experience, meeting the needs of both young and old and giving people a most amazing time to remember for all time.